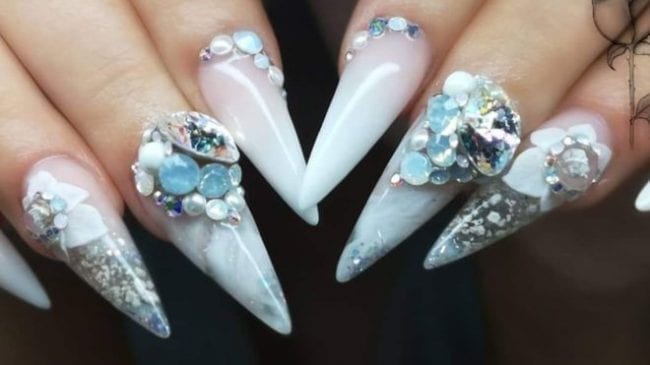 Something old, something new, something borrowed and something blue, the old phrase that brides refer to when hoping to bring luck to the marriage. So once you have checked these off the list the next obvious request would be to have your nail design incorporated a sprinkling of you fathers ashes, right? Well okay not everyone would think that, but one bride from Stoke on Trent chose this as fitting memorial.

Charlotte Watson brought her wedding forward when she realised her father was in the late stages of cancer, however sadly he passed away before her big day.

In comes Charlotte’s cousin, Kirsty Meakin, who came up with idea of incorporation some of the ashes to an acrylic nail design. This might seem slightly random but Kirsty is a big YouTube name and her channel, which unsurprisingly focuses, on nail design has over one million followers. She said: “The ashes were in a little glass pot and we looked through them and picked the pieces we thought would work.”

“It was a bit surreal – these were the ashes of my uncle Mick. I felt slightly detached from it at certain points because otherwise I’d have been a blubbering wreck,”

“It was only when it was completed it sank in what it was. That her dad would be holding her hand on her wedding day.”

Charlotte was delighted and said that “It really felt like he was there,” .

When the big day came the bride was walked down the aisle by her mum Joanne. Touchingly Charlotte had included other mementos to remind her of her father including: a teddy made from one of his jumper and a pair of his old jeans.

Well I guess it wouldn’t be for everyone, but I thought it was really thoughtful, touching … and original. We wish the Staffordshire couple every success….

The main picture is copyrighted by Kirsty Meakin.