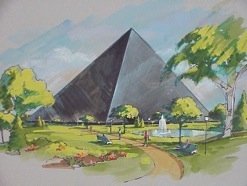 Bernard Madoff had a pyramid scheme which was a scam. On the Giza Plateau, in Egypt the Pharaoh Khufu constructed the largest pyramid ever built, it is made from about 2.3 million stone blocks.

PYRA Development  in Knoxville Tenesse has proposed a development of literally biblical proportions constructed from a material that is more durable than stone and your allocated block will contain memorabilia and the cremated ashes.

The company says “Tradition, reverence, and dignity have always been the focus of those involved in the Death Care business and as one would expect, PYRA does not waver on this issue.” So that is their rational and it may appeal to some. They say it will be a national monument some 200ft sq, there for a hundred generations, well why not, if longevity is what you are after – put your name down…