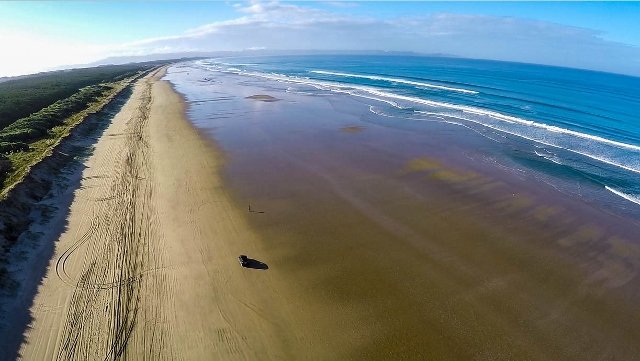 Well I suppose scattering the ashes of a ‘bro’ is one excuse to give the Boys in Blue as a reason for being on New Zealand’s iconic 90 Mile Beach in suspicious circumstances.

However the truth of the matter was the bad guys got busted attempt to smuggle in an eye watering ½ Tonne of methamphetamine (estimated street value of ~ NZ$500M / £250M). Sounds like a scene from the hit TV series Breaking Bad doesn’t it?

This bust has been well reported in New Zealand with some great commentary from the locals, I like this one for it sheer lack of moral outrage in what the villains were up to:

“It’s crazy. I mean, we have people up here that do that stuff (methamphetamine), but this…” one said. “They’ve stuffed up. You’d think they would have know what do, with that much money (at stake). But na, they screwed themselves.”

More of a commentary on the crook’s rather slipshod approach to risk management, than indignation at the scourge caused by this highly addictive, life ruining narcotic.

It does look like the bust was more due to bungling buffoonery than anything else, they didn’t know the local conditions, they had had at least a couple of attempts to land the stuff, they had even bought a different boat – it is believed the men paid $98,000 cash for another one – a rigid inflatable – in attempt to get it right the second time.

It turn out locals had also ‘sent them packing’, telling the men they needed permission to spread ashes. I have this wonderful mental imagine of kindly pensioner informing a bunch of bull-necked, tattooed, gorillas on how to apply to the park’s department for a permit, the ruffians then prodding their mobile phone with sausage-like fingers in an attempt to comply…

So with a combination of information passed on and splendid incompetence the crooks were undone.

I was searching for some moral or pithy point. The rising tide of illegal narcotics and the extreme difficulty of effective and publicly acceptable policy making in this area doesn’t make a rosy picture. And whilst one shouldn’t make light of such issues it is a connection to the ashes world I had never seen before – so that’s interesting.