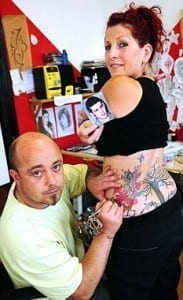 Pictured: David Mordue of the Dai_Zine Tattoo Studio pictured at work on the tattoo.
Re: A MUM has paid a unique tribute to her late son by having his ashes incorporated into a tattoo.
In what is believed to be the first such move in Britain, Kim Mordue used some of her son’s ashes to help make the ink for the deeply personal tribute.
Lloyd Evans, of Resolven, died almost three years ago following a night out in a Neath pub during which he took the party drug GHB.
Coroner David Osbourne later recorded a verdict of death by misadventure.
The large artwork on Mrs Mordue’s lower back and side depicts a cabala tree, an angel releasing a butterfly and a tribute poem to her son.
The 50-year-old, from Llanelli, explained: “I lost Lloyd three years ago on September 29, tragically through drugs. After much research, we decided to use some of Lloyd’s ashes as a tribute.