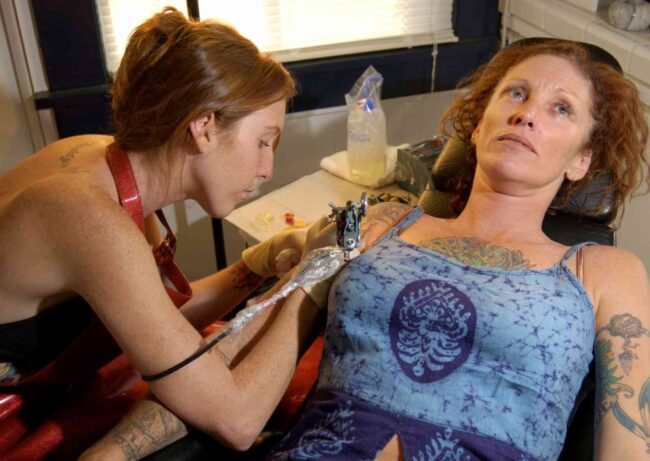 This is a radical way of memorialising a loved one – putting cremated funeral ashes into ink, then having them tattooed somewhere on your person. The more we looked into this the more ‘common’ it actual is.

Despite the obvious heath implications it seems to be fairly popular in the United States.

The article below was from the Daily Mail last month…

A heartbroken mother whose 20-year-old son collapsed and died after taking party drug GHB has had his ashes tattooed into her skin in tribute to him.

Kim Mordue, 50, had her son Lloyd’s ashes mixed with ink, which was then carefully etched into three designs on her back.

The tattoo was done by Mrs Mordue’s husband David who runs his own parlour in Llanelli, South Wales.

Mrs Mordue said: ‘I’ve put Lloyd back where he started – he’s in my body again.

‘As soon as I knew it was possible I wanted to have the ashes tattoos as a tribute to Lloyd.’

The designs across Mrs Mordue’s back show a cabala tree, an angel releasing a butterfly and a poem dedicated to her son.

Mrs Mordue said: ‘I spent a long time researching the tattoos – they and Lloyd will be with me for the rest of my life.

‘Everyone has been very positive about my tattoos. My friends and family love it.

‘People have been quite excited by it and have said they’d like an ashes tattoo done too. I think it will catch on.’

The 50-year-old was left devastated when promising rugby player Lloyd collapsed on a night out.

An inquest into Lloyd’s death recorded a verdict of misadventure after hearing the 20-year-old had taken the party drug GHB.

Mrs Mordue also hopes the tattoo will highlight the dangers of drugs and the damage they inflict on society.

She said: ‘Losing a child to drugs really is the worst nightmare a parent can have. Drugs are a curse on society and a lot of parents can’t do anything about it.’