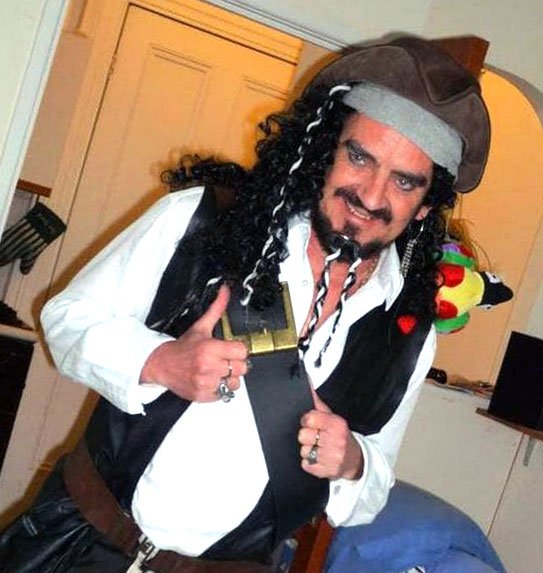 Shiver m’ Timbers etc etc. I adore stories like this.  Drama, ceremony and a dash of irreverence.

Brixham in Devon love their Pirates, so much so that every year they hold a Pirate Festival where the town is mobbed With Long John Silvers although in slightly odd fashion, 101 versions of Johnny Depp’s Character Jack Sparrow from Pirates of the Caribbean.

Clive Mencarini (Presumably he was originally a Barberry Coast Pirate) passed away two years ago and his daughters thought, given that he was such a massive fan of the festival it would be a fitting tribute to have his ashes shot out of a Cannon during the event.

After a delay due to Covid, Leigh and Dee (his daughters) finally got their wish for their dad’s farewell. “It has been a long time, but a pirate always keeps his word!” Leigh told  Devon Live where we came across the article.

“I approached the organisers, and they were very receptive and very keen to pay tribute to Dad. Of course we didn’t realise then the impact the coronavirus would have.”

Leigh went on: “I knew him as dad, but his grandchildren knew him as Pirate Pops”. Clive lived in Torbay for almost 30 years and in that time, he attended almost every Brixham Pirate Festival held. He invited friends and family from across the country to celebrate with him.

So we sent our intrepid journalist Cheryl (Actually she works here at Scattering Ashes) to investigate. Who managed to record the event.

Cheryl said: ” It was such a wonderful tribute, the weather was perfect for such an event.  We had a lovely walk around the festival first and then found a good spot to watch the firing of the Cannons.  What was really poignant was there was a very slight breeze so as the cannons went off and the ashes were fired they were carried ever so gently back over the town of Brixham, which I am sure Clive and his family would have wanted.  A brilliant way for a Pirate to go. Hazzarrrr”

Being shot out a cannon – what a great way to go.  I know what you’re thinking – this is a great option, I’ll contact Scattering Ashes to organise this. Well I agree I think it is a great idea, but sadly we have no access to the organisers if you wish to pursue this then I suggest you go to them directly – Brixham Pirates

Well done Ladies – you did your dad proud.